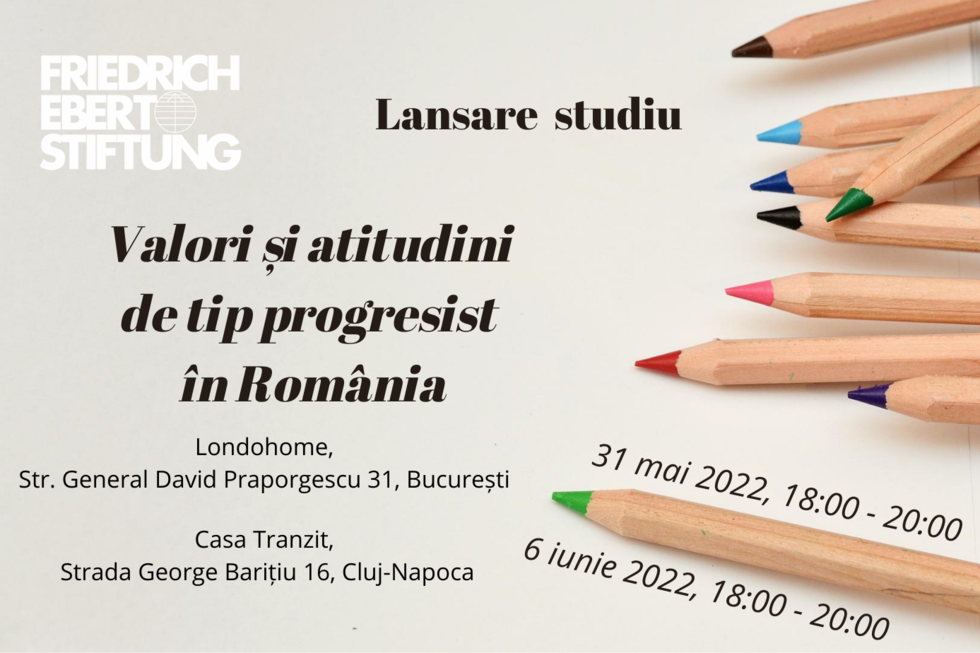 During the last decades in Romania, policies which aimed at stimulating the economy and increasing the country's competitiveness in order to increase the attractiveness of foreign investors have played a central role on the agenda of policy makers. At the same time, redistributive policies, which seek more social justice, have been rather marginal. The result is that despite sustained economic growth, Romania continues to face one of the highest rates of poverty and social inequality. The indicators on the quality of education and health systems also place us at the bottom of European rankings.

In this context, it is important to find out to what extent in Romania there is public support for a change of direction from the current model to progressive policies. Friedrich Ebert Romania Foundation invites you to the launch of a study entitled "Progressive values ​​and attitudes in Romania", which will take place on May 31, 2022, 6 PM, at Londohome, Bucharest, and on June 6, 2022, 6 PM, at Casa Tranzit, Cluj-Napoca.

The study is based on the data of an opinion poll initiated by Friedrich Ebert Romania and led by CC SAS on a sample of 3,666 respondents, representative for the adult population in Romania. The analyzes in this report are structured around three categories of topics:

- Perceptions regarding education and health, with an emphasis on quality and equity.

We invite you to the launch event of the study to discuss its results with the authors: Gabriel Bădescu, Sorin Gog and Claudiu Tufiș. The debate will take place in Romanian.

We are looking forward to seeing you at the event!

We remain at your disposal for any further information: Victoria Stoiciu, victoria.stoiciu(at)fes.de,  021 2110982

This site uses third-party website tracking technologies to provide and continually improve our services, and to display advertisements according to users' interests. I agree and may revoke or change my consent at any time with effect for the future.